Halloween has come and gone, but before we head into the holiday season we wanted to tell you about a cool application of the “Wildfire Effect” that may leave you with some great ideas for next year’s Halloween. (And it’s not too early to start thinking about it!)

Derek Fujimoto, VP of Operations here at Wildfire, has a yearly Halloween family tradition inspired by Wildfire. As a family, the Fujimotos develop their own fluorescent costumes and makeup using Wildfire paint and Kryolan fluorescent makeup, according to a (usually) Disney-inspired theme.

Last year, it was Alice in Wonderland… 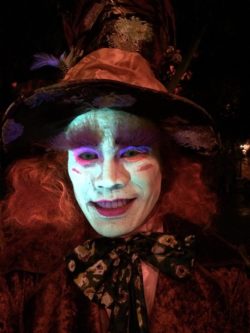 Derek Fujimoto as the Mad Hatter. 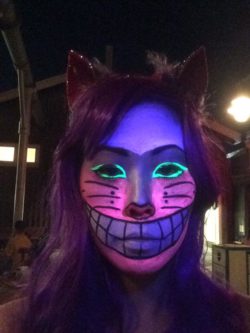 Derek’s wife as the Chesire Cat.

Shoes for the Mad Hatter costume.

This year, it was Snow White (combined with a Haunted Mansion influence), while his brother’s family joined in on the fun with Peter Pan… 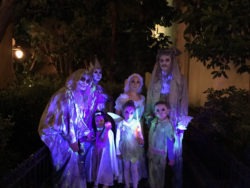 Here are the same costumes in regular sunlight… 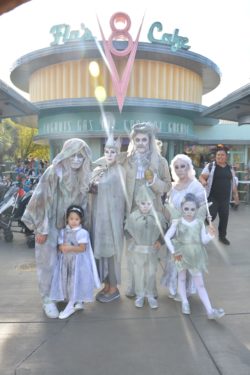 The same costumes in regular sunlight.

“We decide on the theme up to a year in advance,” said Fujimoto. “And we start working on the costumes months ahead of time. The whole family contributes.”

The Fujimotos use a Wildfire Effects Master LED in their home as they work on the costumes.

Once the day arrives, the Fujimotos complete the tradition with a trip to Disneyland to show off their work. Black lights in certain attractions light up the fluorescent effect. The Wildfire black lights in The Beast’s Library particularly light up the costumes, as can be seen in this image…

The fluorescent effect and colors really light up under Wildfire black lights.

What Wildfire-inspired costumes would YOU like to make next year? Start planning now… the Fujimotos are already ahead of you!