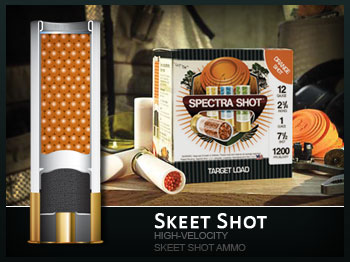 Say you’re out hunting duck with a buddy, and you both shoot at the same bird, but your buddy claims it was his kill.

That’s exactly the scenario that inspired the invention of Spectra Shot™ skeet shot. Spectra Shot is shotgun ammunition with fluorescent pellets – available in four different colors – so you can end the argument once and for all on who shot the bird.

By shooting at night under black light.

Because Spectra Shot’s pellets are fluorescent, they glow brightly under Wildfire UV Long Throw Lighting. That means you can see your shot string and tell immediately if you shot ahead, behind, over, or below when skeet shooting.

The camera doesn’t quite capture all its glory. In reality, the effect is much brighter – like watching fireworks!

Blair Michel, owner of Spectra Shot, relates this story: “We had a 9 year old boy who was skeet shooting for the first time in his life. His first shot was a bit behind, and I asked him if he could see that. ‘Yes’, he said. So he made his adjustment and shattered the next 12 skeet!”

This training method is already in use by the skeet team at the University of Louisiana – Lafayette, and the idea is gaining in popularity.

If you’d like to find out more about Spectra Shot, where to get it, or how to set up a night shooting range, visit www.SpectraShot.com.