“Guess Who?” (2010) by Antoine Merger. Acrylic and fluorescent paint on canvas.

July’s featured UV artist hails all the way from France. Antoine Merger has been producing UV art over the last 15 years as “Punkadelik”, a fitting description of his punk-inspired ‘technicolor’ artwork.

His use of fluorescent paint, which he aptly describes as “liquid light”, is used to add highlight and depth to his vibrant, colorful artwork. Merger writes, “I use fluorescent and acrylic paint mixed together to get a wide range of tones and variations of brightness under UV. I paint on canvas with hand brushes and very rarely make finishing touches with an airbrush.”

Merger takes a decidedly spiritual approach to his art…

“I mainly paint in quite a big scale. This implies a very physical relation between the medium and me. It’s exhausting for the body, and thus puts me somehow in a great meditation state. As if the reception antenna that is the brain is switched on and now able to receive the cosmic broadcast. In this state of mind, I think of political true lies issues, conspiracy theories, religion’s roots and destiny, etc., while my whole body is articulated in a kind of trance and creating the vision.”

“For most of my artwork,” he continues, “I draw a precise sketch that I reproduce in a larger scale with a video projector. Colors come to me while painting.”

“For some pieces (such as “RGB, “Yes Butt”, “My Deer”, and “G.R.A.S.”), I don’t draw any sketch model. I start directly on the canvas applying paint and spreading it with whatever tool comes to hand such as sponges, rags, newspaper, bare hands, etc. Finally, after I have made a hell of a mess in my studio, I just look at the trashed canvas as if looking at the clouds and find strange animals or ridiculous shapes. Then I follow my instinct to outline what ‘talks to me.’ It is a great way of painting. The result is quite surrealistic, although the roots of the process are strongly abstract, and quite astonishing.” 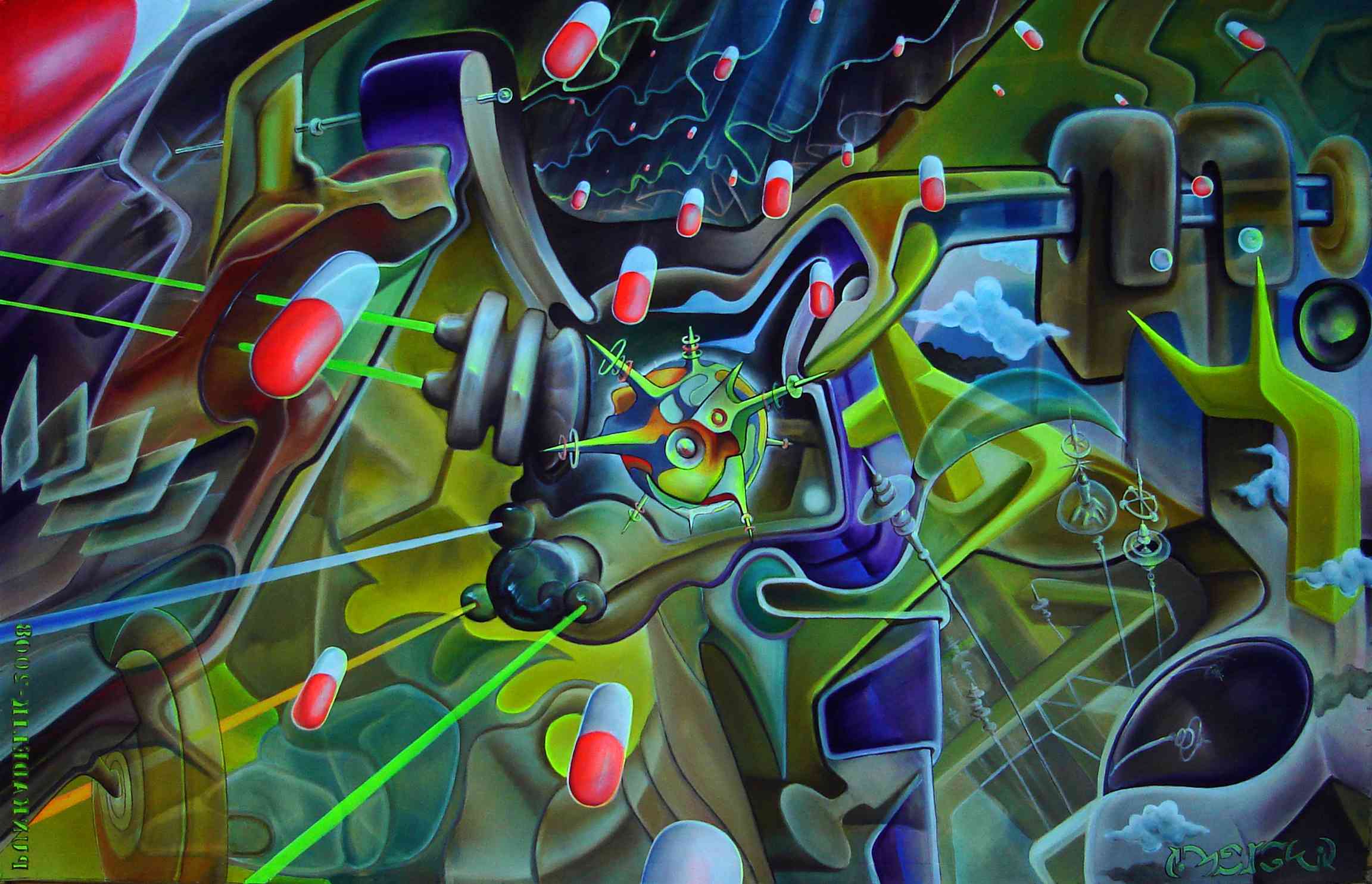 “My Deer” (2008) by Antoine Merger. Acrylic and fluorescent paint on canvas.

Merger now paints under his own name rather than the former “Punkadelik”. His art has more recently begun exploring social issues such as the destruction of wildlife, addiction to computers/television, and genetic manipulation.

He says of Wildfire products: “In the past, I mainly used French and German products. Then I discovered Wildfire paints 6 or 7 years ago. Their quality is way beyond the average (the best in the world, indeed). And the Optical White was a revelation to me! At last I could get earth or skin tones and widen my field.”

You can view more of his vibrant and amazingly detailed art on his website at www.punkadelik.com.