Wildfire LightingFeatured ArtistRick Alonzo: An Artist in Motion With a Message of Devotion

Rick Alonzo: An Artist in Motion With a Message of Devotion

“A small man with a big heart.” That’s how one person described Rick Alonzo.

For the past eleven years, Rick has been showcasing an entertaining blend of martial arts, gymnastics, and… you knew it was coming… black light paint!

The result is quite spectacular… take a look:

But for Rick, it’s all just a vehicle for delivering a powerful message to young people.

“I don’t want to just entertain, I want to give them a message that will forever change their lives. I try to do everything I can to get their attention, then get the message into their hearts. What really matters is the message.”

Rick has been sharing positive, inspirational, and often life-changing messages with kids of all ages since 1993. The message varies depending on the audience: diversity, respect, real heroes, character, winning & losing at sports, saying “no” to drugs or gangs, or – if it’s a church audience – a more devotional message.

Since age 7, Rick knew he wanted to be an artist. He was born into abject poverty in the Philippines. Although he exhibited artistic talent at an early age, his parents couldn’t afford paper and pencils. So instead, he used sticks to draw in the dirt, or charcoal to draw on the walls. At age 12, his family emigrated to California, where he eventually got a degree in art from Long Beach State University.

Although Rick began sharing his messages and doing performance art in 1993, it took some time for his work to evolve into what it is today. 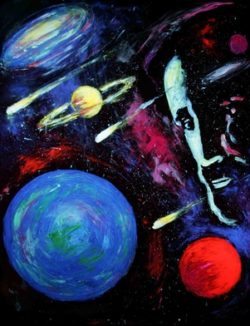 It wasn’t until 1998, for example, after a visit to the Luxor Hotel in Las Vegas, that he got the idea for using black light paint. “I saw the artwork at the Luxor, and it was so vivid, so colorful, so three-dimensional. I knew I had to find out what it was and incorporate it into my show. That’s what led me to Wildfire.”

Rick has also had a lifelong talent for martial arts and gymnastics. But it was only in 2000 when he finally got the idea to incorporate them into his show.

As Rick relates, he struggled with how a spiritual person could study “fighting”. But as he finally came to understand it, “All gifts come from God. And I view everything I do as a worship. It’s a way of giving back to God what He has given me.”

To learn more about Rick Alonzo, and see more artwork and videos, visit his website at www.RickAlonzo.org.