Wildfire & The End Of The World As We Know It 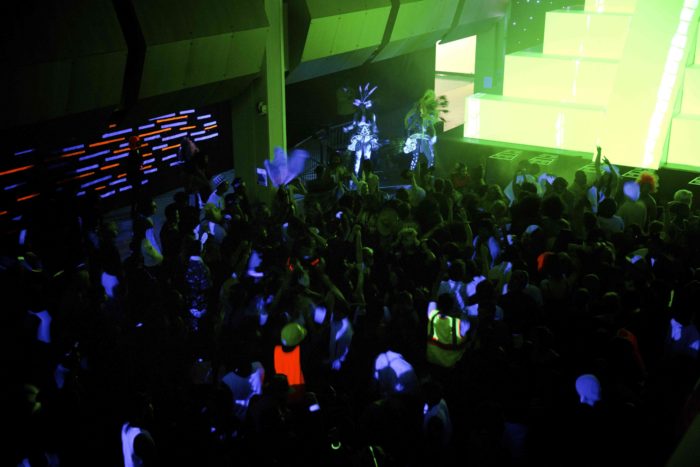 The Mayan Apocalypse – depicted at the CalArts 2012 Halloween Party.

Apparently, the world ends in Wildfire!

At least that’s how a collaborative team of Cal Arts students chose to depict the Mayan-predicted doom last Halloween in an interactive art exhibition, 8-months in the making.

Centered around a monolithic Mayan pyramid (partially shown in the top right photo), guests were bombarded with mesmerizing video projections, rhythmic trance music (offered by DJ “priests” at the top of the pyramid), and various glowing, vibrant images produced by the “Wildfire Effect”–all in an effort to artistically portray “the end of the world as we know it.” 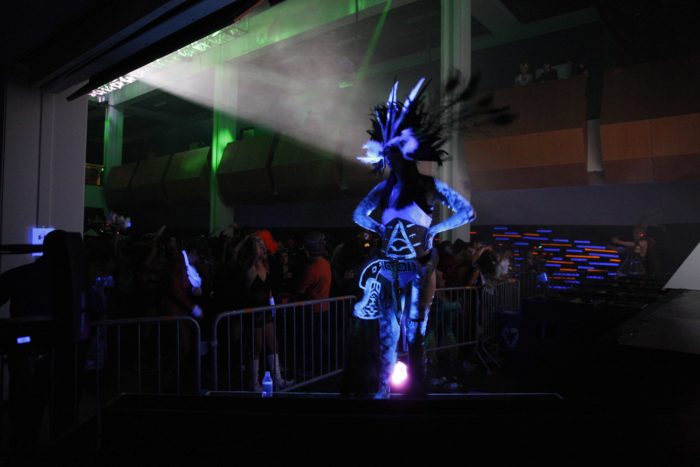 What is hidden becomes revealed. UV makeup adds an extra dimension to this Mayan costume.

As the music increased in intensity, the organic layers of video shifted into a series of staccato images. Lightning effects produced by rotating mirrors filled the room with electric tendrils. And Wildfire UV Long Throw fixtures revealed previously-hidden images of Mayan symbols and environmental deities in the walls around the room. In addition, performers wearing UV makeup added an extra dimension to already elaborate costumes.

Just as the intensity reached a climax and could go no further, and as the world appeared to be on the verge of being completely consumed by this conflagration, the chaos finally subsided and guests were relieved to see the dawn of a new day, and know they had survived the apocalypse.

We don’t know what will happen this December 21… but if we’re still around afterwards, we’ll be writing about more interesting and creative uses of “The Wildfire Effect” in 2013!

Stay tuned! (And let us know how you’re using Wildfire fixtures and paint!)